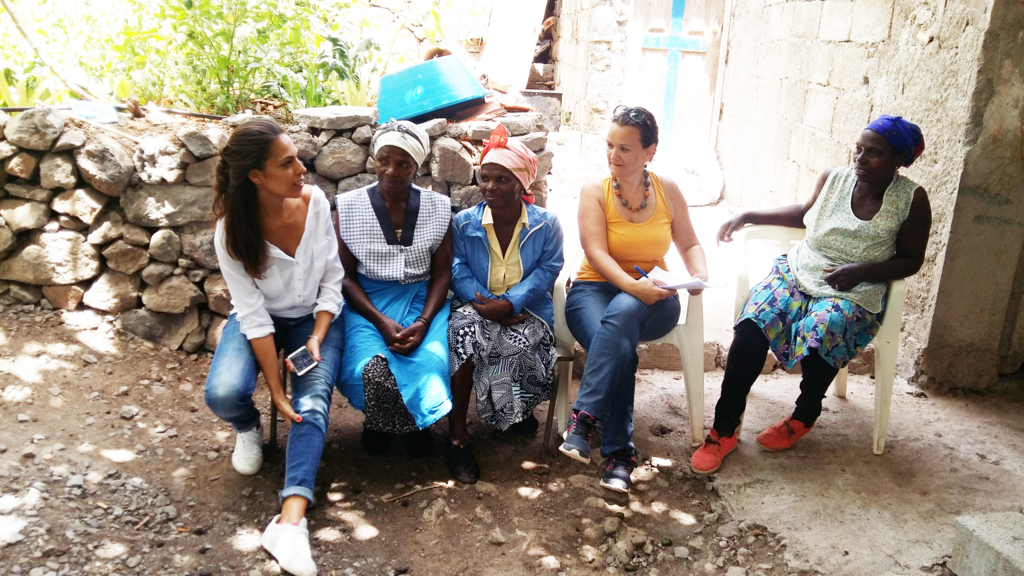 The wind-swept islands of the archipelago of Cabo Verde, with their mountainous terrain, make life harsh and pose constant challenges for their inhabitants. Over 350 000 of the estimated 500 000 Cabo Verdeans live in rural areas. They traditionally grew enough produce to feed their families, but as a result of crop-growers resorting to a simple slash and burn process, the surface area of arable land was drastically reduced over the course of a generation. Not only did this cause problems for food growers, it also created landslides and surface water retention problems. Rainwater increasingly ran off down the steep slopes, making water collection extremely difficult. Life for women was particularly hard. The lack of surface water meant that they were required to carry up to 20 liters of water at a time from distant sources back to their homes. Many women seasonally migrated to towns, fleeing the hardship induced by lack of water.

Harnessing the land and water resources as a means to achieve sustainable development was the principle behind the AfDB funded project which worked in two watershed basins of the island of Santiago. The project feasibility was studied from 1997-2001 by the FAO and was approved in 2002 for an amount of 5,96 million UC from the AFD, with cofinancing from BADEA (3,41 million UC) and the Cabo Verdean government (2,18 million UC).

Raised platforms or terracing with stone gabions were the solutions offered to curb the erosion and recover arable land. A system of dams, irrigation, and a tree planting project were also financed. To enhance sustainability and make the program inclusive, awareness and skills-building courses were held. 66 persons were trained in professional skills and 70% of the jobs created are positions held by women.

In the context of the evaluation scoping mission of the Cabo Verde Country Strategy and Programme Evaluation, evaluators from the AfDB’s Independent Development Evaluation (IDEV) and staff from the AfDB Regional Office in Senegal conducted a field visit in May 2017 to assess the current state of infrastructure and other socio-economic impacts of the intervention, particularly for women. Infrastructure works on the Picos and Engenhos watersheds on the island of Santiago began in 2007. A decade down the line, the evaluators found that the infrastructure is still in good condition, as shown in the photo below of a retention dike to slow down the water runoff and promote water infiltration for agriculture.

The mission also interviewed three women belonging to a co-operative of seven women, who had all received training in agriculture. The training programme was flanked by a subsistence salary and social security coverage for them, and a line of credit was made available.

The women’s group reported to the IDEV evaluators that the dynamics in the region had changed: the project had brought on improvements in food production, nutrition and access to education for their children. The women gained access to a loan to buy 6 cows and a bull. One of the animals died but they did not have to repay the credit for that animal. Joana Gomes Lopes said that the training she had received had taught her how to farm more efficiently.

The women also reported that nowadays, they remain in their village throughout the year, cultivating lettuce, beetroot, courgettes, peas, turnips, lemons, mangos and sugar cane. They attend agricultural fairs and sell their surplus food at the market, and have consequently gained financial security. Their main problem today is the state of the road during the rainy season.

Works on Infrastructure in Picos and Engenhos watersheds on the island of Santiago began in 2007. A decade down the line, infrastructure is still in good condition, as attests this photo of a retention dike at "Agua Grande" to slow down the water runoff and promote water infiltration for agriculture.

During the evaluation of the Cabo Verde Country Strategy and Programme from 2008 to 2017, which is expected to be delivered during the first quarter of 2018, IDEV will try to ascertain the impacts of the Project of watershed management for over 6300+ beneficiaries and the overall state of the watershed. IDEV will also try to evaluate the sustainability of a simple of soil and water conservation works built by the project.

The evaluation is on this link in English.

Hi Kate, would you have the evaluation of this project done in 2018? Thanks