WOMEN UP IN ARMS: Zapatistas and Rojava Kurds embrace a new gender politics.

By Charlotte Maria Sáenz, Other Worlds 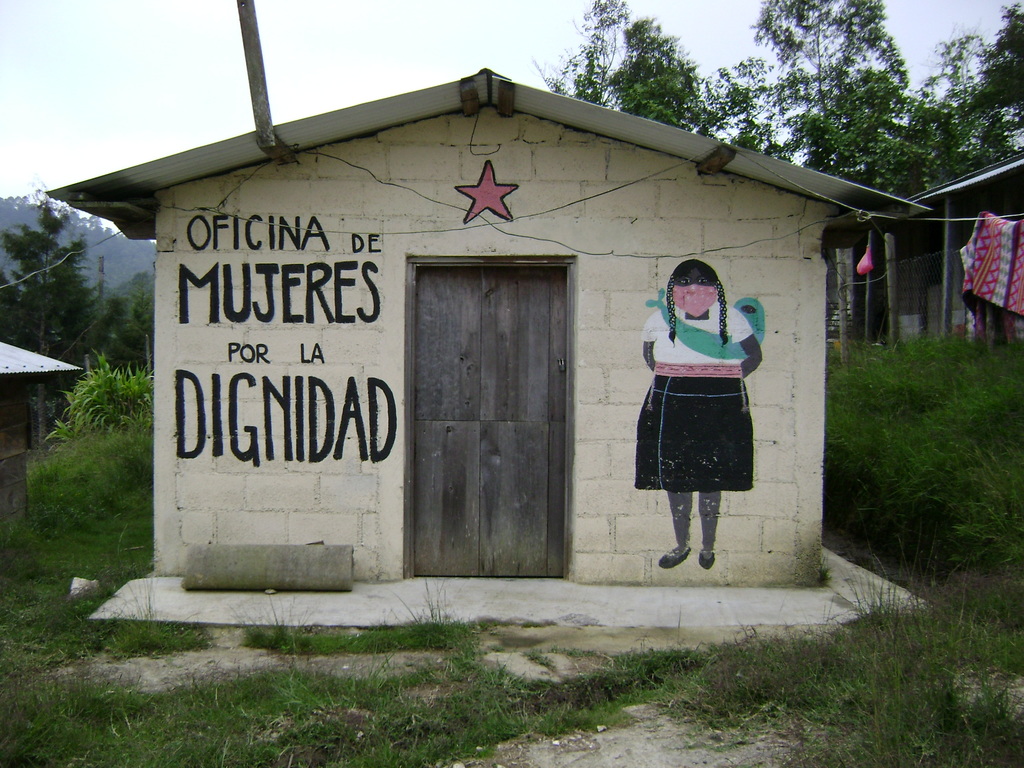 Resistance and strength manifest like weeds through cracks in Chiapas, Mexico and transnational Kurdistan where the respective Zapatista and Kurdish resistance movements are creating new gender relations as a primary part of their struggle and process for building a better world. In both places, women’s participation in the armed forces has been an entry-point for a new social construction of gender relations based on equity.

While the Kurds have been fighting for their survival against ISIS in the Syrian/Turkish border town of Kobane, the Zapatistas put down their arms over 20 years ago and have maintained a non-violent struggle since. In both cases, women have fought alongside men against their own collective obliteration while making radical changes in their gender relations. Working towards more equity makes possible more direct democracy in building greater autonomy from the state.[1] In both efforts, there is also a deep connection to the land[2] that regards the value of women and the environment as essential to life itself.

In both resistances, women took up arms to fight alongside their male counterparts, showing both willingness and capacity to fight as soldiers. However, their principal objective in the mountains is not military. Rather, their most important task is to form new persons: men and women in a more equitable relationship to each other--a relationship that is also anti-capitalist. “Above everything, we want for our militancy to create a new personality, one that is in complete contradiction to Capitalism,” says a representative of the Kurdish Committee of Jineology (a committee of and for women founded by the transnational PKK (Partiya Karkerên Kurdistanê), the Kurdish Workers Party.[3] Theirs is a commitment to building democracy, socialism, ecology and feminism.

The Zapatistas made a similar commitment to more equitable gender relations. One of the first things to come out of their armed uprising in 1994 was the Revolutionary Law of Women. This law spelled out 10 new rules giving women unprecedented power over their lives, including choosing whether and whom to marry, the right to serve on governing councils, and the right to bear arms as milicianas, militia fighters, in the Zapatista Army of National Liberation (EZLN in Spanish).  Zapatista women also asked for the law to include a prohibition of drugs and alcohol, in order to address one of the main causes of domestic violence. After the ceasefire only twelve days after the uprising, many women soldiers transitioned to a non-military political life taking unprecedented positions of governance, education, administration, and decision-making—another ways of taking up in arms, this time with each other and with men. For the last 21 years, both men and women have been in a process of unlearning old gender norms, relearning how to be and relate to each other anew, sharing both domestic and public duties. Although the construction of gender equity is still in progress, these new relations between men and women have been a fundamental component of the construction of Zapatista autonomy itself.

These radical changes in gender relations are occurring in contexts of tremendous violence and war of both high and low intensity. In Kobane, near the Turkish border, Kurds have been upholding a heroic resistance to the ravages of ISIS on the one hand, and the racist and repressive manipulations of the Turkish State on the other. In Chiapas, the Zapatistas have been building their autonomy within the increasing violence of a narco-state that dominates much of the nation, where it is hard to discern the difference between government and drug traffickers. In nearby Guerrero--a southwestern state in Mexico also known for its rich natural resources, intense drug trafficking, resistance movements and community policing--women have also joined the armed ranks of the policia comunitaria. These armed patrols have risen to fill the vacuum left by corrupt police on the narco-payroll, and are on the rise in various other communities across the country. Men and women are fighting together on these different frontlines, sometimes crossing state and national borders to join in combat, like the many young anarchist women from Turkey who crossed in busses into Syria to help the Kurds in Kobane resist ISIS in the past months.

Certain parts of the 30 year-old Kurdish resistance have also taken on the project of forging more equal relations between men and women as a crucial part of their political project. With Kurds spread across Turkey, Syria and Iraq, the geopolitical concept of Kurdistan has been expanded trans-nationally into what some are describing as a “Democratic Confederalism” that transcends nation-state borders. This is an aspiration as of yet, not a fully developed reality, nor one embraced by all Kurds. These ideas are mainly derived from the evolving writings of the leader of the Kurdish Workers Party, (PKK) Abdullah Öcalan, who has been imprisoned in Turkey since 1999. His “Democratic Confederalism” aims to build a new system that works towards the just distribution of resources as well as the conservation of the environment. It seeks to create a society free of sexism, replacing traditional patriarchal societies, religious interpretations, and capitalist merchandising of women. The movement has undertaken an intense societal and educational labor to combat the patriarchal mentalities implanted in women, as a form of submission, and in men, in form of domination.[4]

Zapatista and Kurdish resistances have taken on a radical paradigm shift that changes everything. In the Zapatista autonomous municipal administration center called “Caracol de Oventic”, there is an “Office for Women’s Dignity” where women gather to discuss the successes and failures of the Revolutionary Law of Women. Similarly, the PKK’s “Jineology Committee” studies women’s histories to understand the construction of hierarchies and nation-states that erode women’s power in society. Both communities come from intense patriarchal histories and contexts, so there is still a long way to go in both movements. Yet in a short time they have made extraordinary gains. Women are increasingly represented on governing councils and active in their armed ranks, but the real revolution is seen within the domestic sphere, where caring for children, health and home are shared labor between men and women. Both Kurds and Zapatistas offer a living example of what is not only possible, but of what is already being practiced and grown.[5]

Working towards what the Zapatistas would call an “Other” way of relating to each other, men and women traverse spaces of war as well as of pastoral, agricultural and domestic care--learning with and from each other whether in the battlefields or making food. It is in these everyday practices of building autonomy that we begin to unearth the possibility of another kind of life, of another way of knowing, being with and relating to each other that can create and nourish better ways of living. It starts with making patriarchal habits visible. Constructing more equitable relations means a daily practice of better, kinder ways of relating between men and women. This is the learning for all of us to put into practice within our own places and with our own people, not only up in arms, but also arm in arm…abrazándonos, embracing each other.

[2] “Land and Liberty” has been the rallying cry of the Zapatistas, both then and now, while “Land or Death” the slogan heard in the Botan district today as reported by Heysam Mislim in “Kobane Diary: 4 Days Inside the City Fighting an Unprecedented Resistance Against ISIS,” Newsweek, October 15, 2014.

[5] For a more in-depth description of the Kurdish Women’s movement see https://www.opendemocracy.net/arab-awakening/necla-acik/kobane-stru....

Charlotte Maria Sáenz is Media and Education Coordinator for Other Worlds and teaches at the California Institute for Integral Studies in San Francisco.