During the 13th biannual Conference of the European Evaluation Society in Thessaloniki, Greece, (EES2018), members of the EvalPartners´ sponsored initiatives EvalGender+ and EvalYouth participated in a fishbowl session entitled Promoting Gender Responsive and Equity focused Evaluation among young and emerging evaluators: Experiences in cross-collaboration between EvalYouth and EvalGender+. The session was moderated by Marco Segone, from UNFPA, and had contributions from Fabiola Amariles, Rituu Nanda and Svetlana Negroustoueva, from EvalGender+, as well as Gerardo Sánchez and Claudia Olavarría, from EvalYouth LAC. 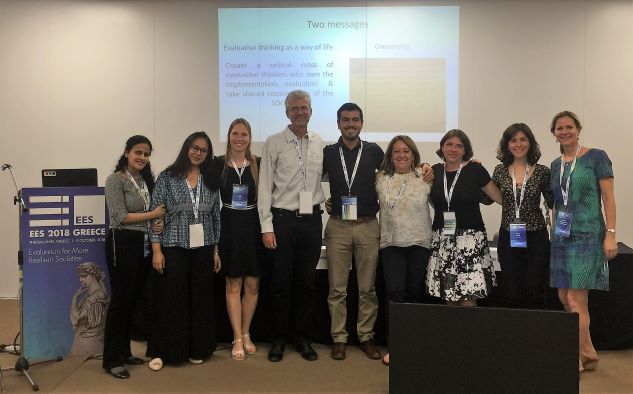 EvalGender+ and EvalYouth strategic networks were launched in 2015 as part of the global platform to develop the 2020 Action Plan on Evaluation and to contribute to the Sustainable Development Goals (SDGs) 2030.  The two networks have been strategically engaging since. In December 2017, during joint ReLAC/IDEAS conference, representatives of these two initiatives from Africa, Asia and the Americas gathered in Guanajuato, Mexico to develop a formal strategy to enhance collaboration between the two networks. Several lines of action were identified for engaging of and strengthening skills of young and emerging evaluators and promoting the demand and use of Equity Focused and Gender Responsive (EFGR) Evaluations, for SDGs and beyond. The following objectives were agreed to: (i) capacity development on the inclusion of a gender perspective in evaluation among young and emerging evaluators, (ii) increasing strategic approaches and sustainability of the collaboration, and (iii) mentoring experience for young evaluators using an EFGR approach.

EES2018 was the opportunity to review achievements and milestones and to obtain feedback on the work done. Participants of the panel reflected on key lessons from operationalizing these objectives to-date and draw paths for further and deeper collaboration within the two networks. We also reviewed the possibilities that arise from promoting a participatory evaluation approach, including the participation of vulnerable populations (especially youth and women) within the context of EFGR evaluations.

Three topics of discussion emerged from the session:

As part of the ongoing partnership EvalGender+ / EvalYouth, a joint webinar was held about lessons learned and hot tips to make evaluation gender responsive, having Feminist Evaluators Svetlana Negroustoueva and Silvia Salinas-Mulder as speakers. The event was attended by 125 participants from around the world (mean age 36). The main ideas presented in the webinar were around the main principles of a Feminist Evaluation as well as gender-transformative approaches, which would: explore why differences between women and men exist; acknowledge and value differences, not considering women as a homogenous category; and guide evaluators to be reflexive, considering that evaluations are not value-free, and that there are different ways of knowing; stress different voices, give voice to women within different contexts and advocate for marginalized groups.

“When I decide what to do and I do it, then I have taken ownership”. Philip Forth

Participation, inclusion, and ownership are key learning topics in the association EvalGender+ / EvalYouth. We often use the term participation, but do we reflect on the degree and depth of engagement? When communities own the evaluation process, they develop an evaluative mindset and can act based on evidence. Constellation’s Community Life Competence approach aims to foster ownership through action learning cycle from planning to self-assessment. For example, in 90 villages of Assam (India), we used family and community-centered approach to immunization where youth have played a key role. Community members collectively learned about the current status of an issue, compiled an action plan and tracked their own progress. Community members valued the contribution of youth, youth recognized the importance of immunization and will ensure it for their own children. Youth learned to think critically. Additionally, family-centered approach ensured that onus of health of the children was not solely on the mother.

For contextual and realistic evaluation on issues related to communities, let us create human-centered conditions and make participation less cosmetic and more substantial. For achieving SDGs, all stakeholders have a key role to play. Communities need to shoulder the responsibility, then, ‘no one will be left behind’.

Some other examples of successful associations, developed as one of EvalGender+ main initiatives and framed in the scope of the common agenda developed in Mexico in 2017, included a mentoring experience for young and emerging evaluators (YEEs) that actively participated in the second phase of the project on South-South collaboration on capacity development for Gender Transformative Evaluation developed in Asia (CoE SA), Africa (AGDEN) and Latin America (ReLAC and REDWIM). (See interregional report in English here and Spanish here). Interviews and analysis were made by YEEs that allowed to get a view on their needs regarding culturally and gender-sensitive training, but also we learned from each other in a two-way mentoring process. No doubt that our profession has an ample opportunity to contribute to social change and we are on track to continue building our capacities to reach this goal.

The next steps in this collaboration are pursuing the activities drafted in the agenda, as the creation of the joint task force to guide these efforts, and also to provide an input to the ongoing EvalYouth´s mentoring program to include the EFGRE approach.  It will also be relevant to seek the involvement of the local VOPES, local EvalYouth Chapters and also international evaluation bodies.

We firmly believe this is a good example to encourage evaluators from EvalPartners networks to cross-collaborate, in order to find a diversity of valuable perspectives that, we hope, will enrich the evaluation practice to leave no one behind.

Please join EvalYouth and EvalGender+ and reach us out at: