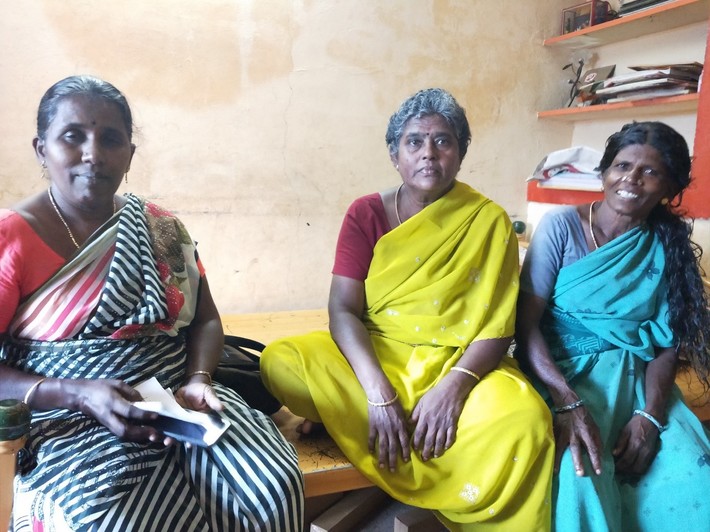 This case study from an evaluation with highlights the complexity of women's empowerment. Researchers distinguish between individual (power to), interpersonal, collective agency (power with) and attitudinal change (power within) towards structural change. This small case study highlights that it is important to locate the empowerment debate in the context of marginal identities which marginalised women occupy, and how the pace of empowerment may be faster with regard to one marginal identity than another.  Like race, oppression due to caste identity can only be slowly overcome, while comparatively class is easier.

45-year-old Vijitha (name changed) is an Arunthathiyar (oppressed amongst the oppressed caste of Dalits) who works as an Anganwadi (early child hood care and development centre) worker in Mekalapatti.  Mekalapatti comprises of roughly 250 households.  Other than 10 households the rest are Arunthathiyar and other Dalit households.   Vijitha herself is a member of one of the ten SHGs in the village formed by Arogya Agam, partner of Village Service Trust.

There are around 50 children in in the age group of 0-5 years in the area covered by the anganwadi centre which Vijitha manages, of whom 25 come to the anganwadi regularly, 12 female and 13 male children.   It is mainly children from Dalit (including Arunthathiyar) community who come to the centre. The children from Backward Classes (higher in the caste hierarchy than Dalits) who come do not eat food cooked by the helper (Arunthathiyar) due to caste hierarchies, but take dry rations home.

Vijitha moved up the hierarchy from being cook/helper to Anganwadi worker. Her name was suggested by the SHGs in the village for the post.   She was recently offered the promotion-post of Anganwadi supervisor, wherein she would have to supervise other anganwadi centres too.  When asked the reason, she stated that she is happy with what she had achieved.  However, one was left with the doubt whether the main reason was possible non acceptance of Anganwadi workers of “higher” castes.

The anganwadi centre is open between 8AM to 3PM, and contributes to early childhood development and employment of mothers, as child care in India is by and large considered the responsibility of mothers or grandmothers.  She notices no difference in nutrition of children of SHG members (10 in the village) and non-members, though the lone (girl) child who was underweight was a non-member’s child.   According to her, with increase in income and awareness, the consumption of vegetables, eggs and milk has gone up over the years in the village, though intra household inequalities persist amongst adults.     However, the children of SHG members are more regular and prompt in coming, and several of the mothers in “mother’s committee” come from SHGs.   Meetings of adolescent girls take place, unlike in many other villages, and benefits of greens are elaborated, and those who are anaemic are referred to health such centres.   The adolescent girls are made aware menstruation and use of sanitary pads, which is supplied free of cost for adolescent girls going to government schools.  Anganwadi committees- covering all aspects- were taking place years back, but not now.  On paper a few SHG leaders are in the committee, as well as local government leaders and Auxiliary Nurse Midwives.

Empowerment is a process. It is not a stage which one “reaches”.  Further, with regard to some identities (here class and gender) one may be making progress, but not all identities (in this case study caste). On some aspects within class and gender a person may be more empowered than others.

I think it is a great suggestion that SHG members have a role in local government.  Thanks Ranjani for also raising the caste related inequities in the site of your study.

As we know communities are not homogeneous. Constant reflection on who has progressed and whose voice is missing is key if we truly want competent communities.