The date was 30 April 2019, and Kenya’s Capital City of Nairobi was full of activity. It brought together key stakeholders in evidence-informed decision-making as well as actors on gender and evaluation.

Two key evaluation actors namely the African Gender and Development Evaluators Network (AGDEN) and the International Development Evaluation Association (IDEAS) had just won a competitive award for the International Organization for Cooperation in Evaluation (IOCE) and EvalPartners Innovation Challenge Project 2019. The title of the project was “Expanding Democratic Spaces for more Inclusive and Equitable Governance: Integrating Gender-Responsiveness and Equity-Focus into Legislation through Evaluation”.

Picture 1: The Banner of the Breakfast Meeting 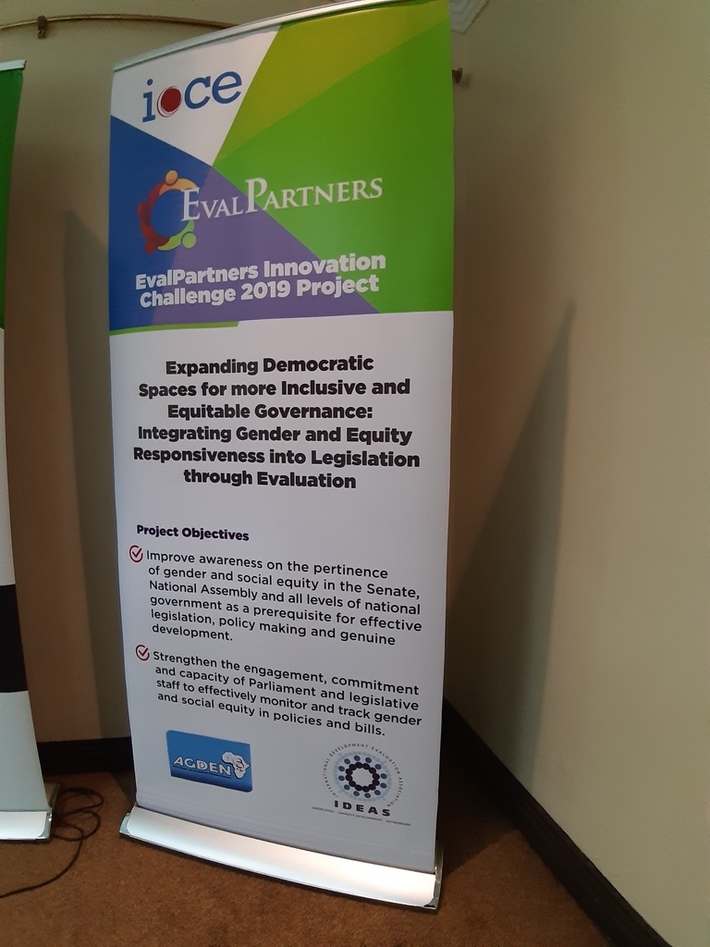 Eddah Kanini, the Project Co-Cordinator, and the Lead of the Gender and Equity-focused Evaluation Thematic Interest Group (ITIG) at IDEAS, highlighted the objectives of the project, which included: to raise awareness on the pertinence of equity in gender representation in the Senate, National Assembly and all levels of government as a prerequisite for effective policy-making and genuine development; and to strengthen the capacity of Parliament and legislative staffs to effectively monitor and track gender equity policies and bills.

Hon. Dr. Makali Mulu, the Chair of the Parliamentary Caucus on Evidence-Informed Oversight and Decision-Ma... and who also chaired the meeting, in his speech highlighted the role of the Caucus on mainstreaming use of evidence in Parliament through legislation, oversight, representation and budget-making. They are keen on encouraging the Members of Parliament to use data to inform their debates in the House. Dr. Florence Etta, the Vice-President of AGDEN, also the Project Co-Cordinator, and Special Advisor to the UN Women Independent Evaluation Office (IEO), specifically laid emphasis on the role of gender and social equity in informing decision-making. She gave highlights of the Global Agenda 2030 – the SDGs and how they laid emphasis on gender and equity, having over 50 Indicators talking about gender. At the regional level, she gave an example of the African Union Agenda 2063 again on how it stresses on gender and social equity. At the Kenyan Country context, she gave Constitutional provisions as well as emphasis on the role of Parliament, by giving example of Articles 95 and 96 of the Kenyan Constitution, which single out the role of Parliament as representation, legislation, appropriation of resources and oversight. She stressed that most evaluations do not specifically respond to gender equality and social equity. To have a prosperous continent, a country based on sustainable growth and development, then policies and legislations need to be responsive to gender equality and social equity. Finally, she stressed on the role of partnerships to address and achieve these goals. 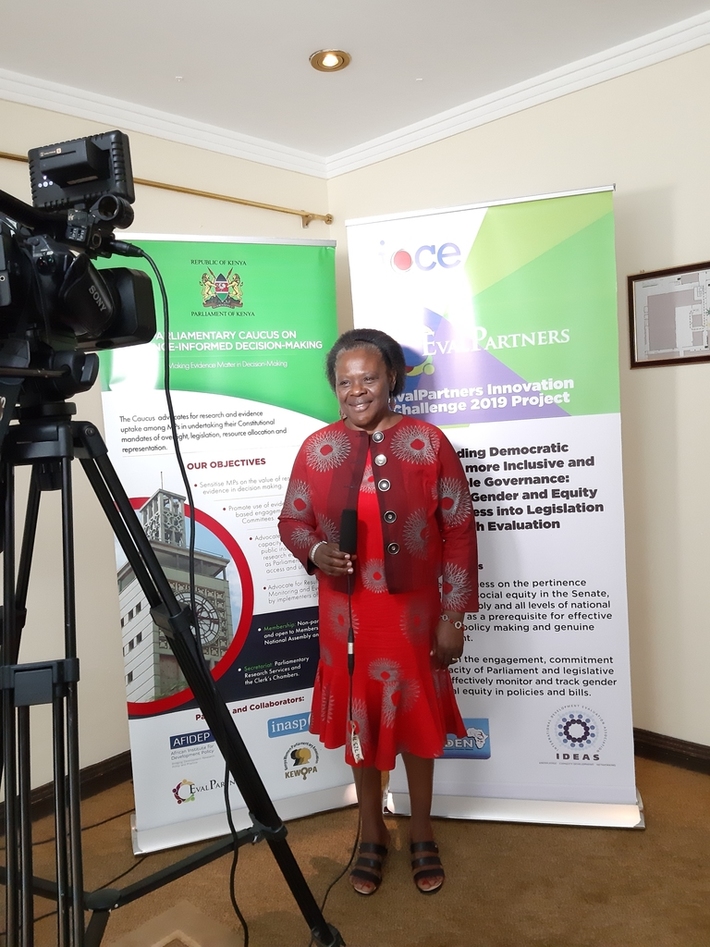 On his part, Dr. Samson Machuka, the Director of the Monitoring and Evaluation Department highlighted the role of the National Integrated Monitoring and Evaluation System (NIMES) and its achievements since inception in 2003. He also highlighted the specific objectives of NIMES, which include inter alia the provision of timely and reliable feedback mechanism to inform the budget process. He also stressed on the rationale for the development of the M&E Policy in Kenya, while giving the outline of the objects of the National M&E Bill, which the Parliamentarians present pledged to push to adoption in Parliament. His speech emphasised on the collaboration with Parliament, the Parliamentary Caucus and the Monitoring and Evaluation Department (MED) to strengthen evidence use. And on this note, welcomed the collaboration with AGDEN and IDEAS through the EvalPartners Initiative. 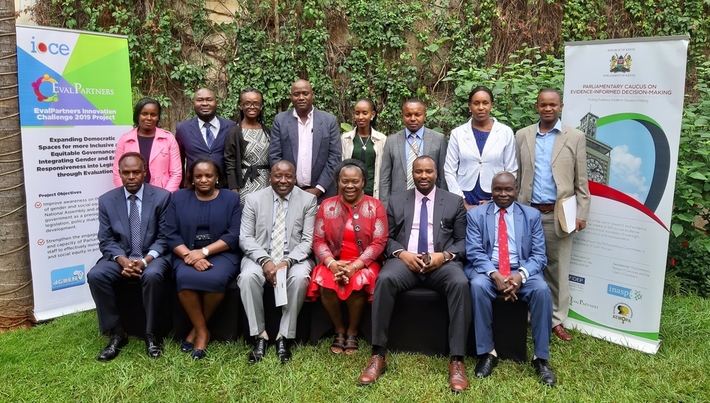 Also represented at the meeting was the Kenya Parliamentary Research Services (PRS) through Dr. Kefa Omoti, standing in for Dr. Bonny Mathoka. He highlighted the role of PRS, which included: to generate and disseminate research information; assemble sectoral data, and information on comparative aspects of parliamentary practice and procedure; to undertake legislative research and public policy analysis to generate policy briefs and options to sustain evidence-informed decision; and to initiate anticipatory research on topical issues. He also highlighted the role of PRS in budgeting and planning processes through analysis of research data, generation of ideas and interests; analysis of political context, as well as the availability of resources to help inform decision-making process. 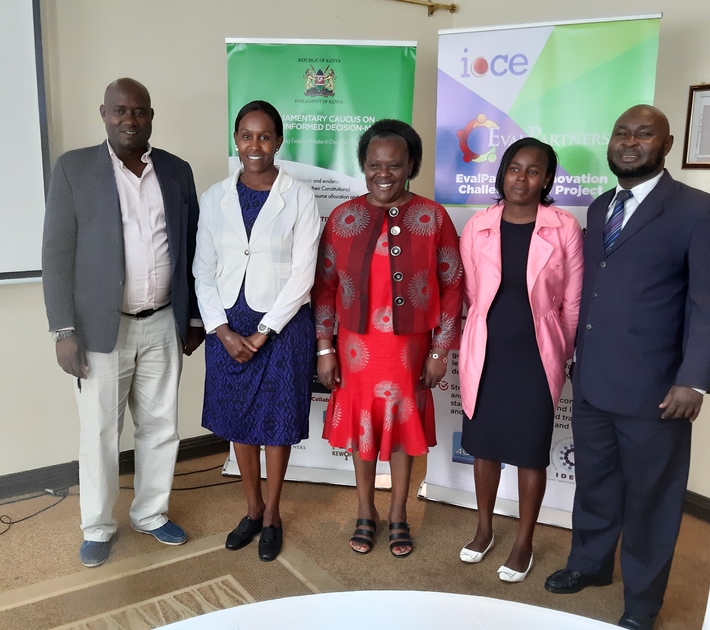 The key achievements of the meeting were the agreement on collaborative work with the Partnership going forward and agreement on the training of the Members of Parliament on the basics of Monitoring and Evaluation laying emphasis on Gender and Equity-focus. The adoption of the Parliamentary Caucus Strategic Plan was the climax of the whole event with the members agreeing on the roll out plan, including the lobbying for the Kenya National M&E Policy and Bill. All in all, the participants re-empahsised the need for gender and equity-focus in informing decision in Parliament, and made commitments to continue working towards the realisation of this goal.

Thank you Eddah! It has been good working on this together.

The teamwork and focus on issues has been great and something to emulate. Its indeed a success story.