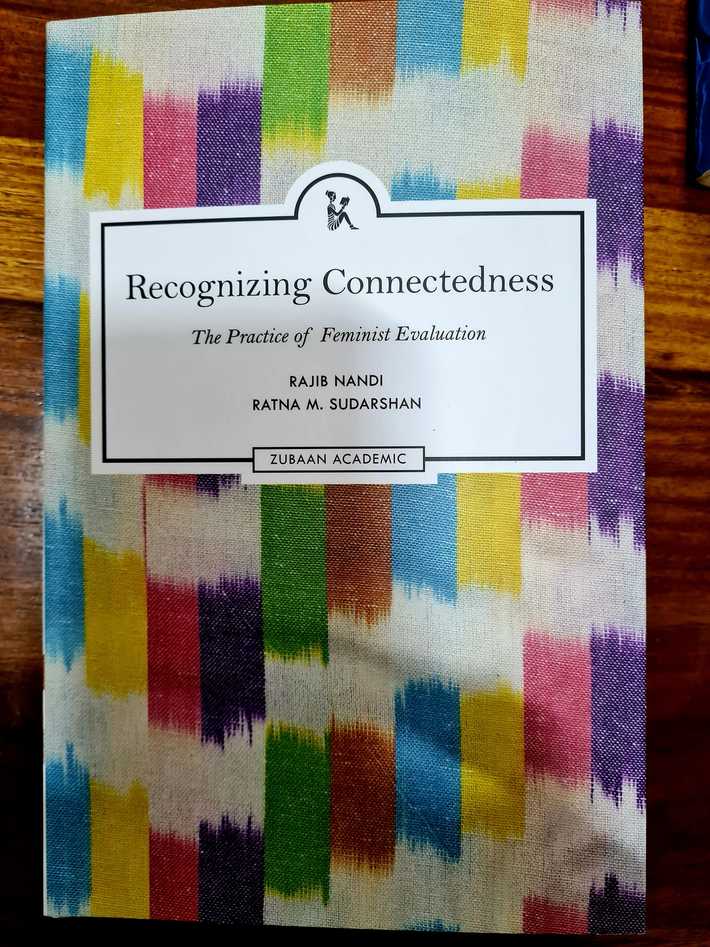 - When I asked women and men from six Chennai [India] slums: "What are the changes - positive and negative - you have seen in the last five years in the institutions of marriage, family, markets and state?" they pointed to quite a few changes and recommendations. These are discussed first, followed by recommendations from evaluations of government schemes in the same city. The disjuncture between women’s evaluations and government evaluations is then contrasted, and, finally, recommendations are given to bridge the gaps so that gender relations and institutions change for the better.

Against these rich inter-institutional evaluations of marginalized women and men from low income slums in Chennai, government evaluations in the same area are sectoral and focus more on assessing implementation than outcomes. For example, the assessment of urban health posts covers staffing, infrastructure, coverage of maternal child health and family planning services and morbidity rates vis-à-vis routine and communicable diseases (sex-wise). However, provision of controversial safe abortion services, de-addiction services, health problems related to violence on women, and health outcomes are not reported. Neither is the linkage between water and sanitation services and health reported.

The evaluation of Jawaharal Nehru National Urban Renewal mission (which aims at strengthening drainage, solid waste management, water management, basic services for urban poor, working women’s hostel, women’s participation in planning) examines number of projects initiated, institutional capacities, percentage of projects completed and percentage of budgets released and spent. That is, the focus is on implementation and outcome. Issues such as displacement and access of migrant women and men to services are not addressed.

The assessment of Swarna Jayanthi Shahari Rozgar Yojana, an urban wage and self-employment scheme, assesses whether a survey of beneficiaries was conducted, whether an action plan for implementation exists and is implemented and whether funds flow and spending is as planned. Again, the focus is on implementation. The evaluation concludes that a survey of beneficiaries was not conducted, an action plan was not prepared and approved NGOs [non-governmental organisations] not used for training, and funds were diverted for community toilets and bathing spaces (a need of women and men!)

There are three conclusions. First, what women want (inter-sectoral and inter-institutional – see figure below) is different from what government evaluations recommend. 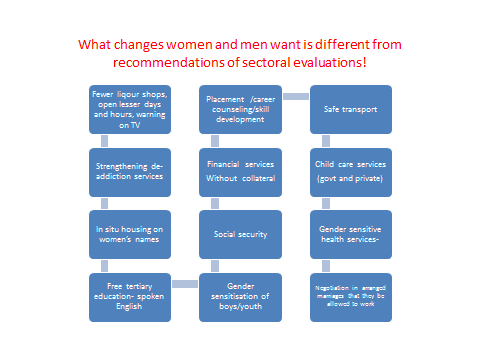 Source: Murthy, 2015, “Power, Institutions and Gender Relations: Can Evaluations Change Them?” on 24th, May, 2015 at Canadian Evaluation Society, 2015, Montreal.

Second, government evaluations of the present kind cannot transform power, institutions and gender relations. They focus on one sector, assess individual and not institutional impact; they assess implementation and not (adequately) outcomes or impact; and they rarely assess changes in gender and social relations within implementing agencies. They push the burden of development on women and do not examine issues of masculinities and development (other than in the context of HIV and violence against women).

Third, government in consultation with gender-experts may, in addition to sectoral evaluations,

Based on presentation by Ranjani K Murthy with support from CES and ISST: "Power, Institutions and Gender Relations: Can Evaluations Change Them?" on May 24 2015 at the Canadian Evaluation Society, 2015, Montreal, Canada.

This is really a great post! I am wondering if Indian government have any specific programs (health, gender, income any) related specifically only for people living in slum areas. If yes, has government done any evaluation of these programs?